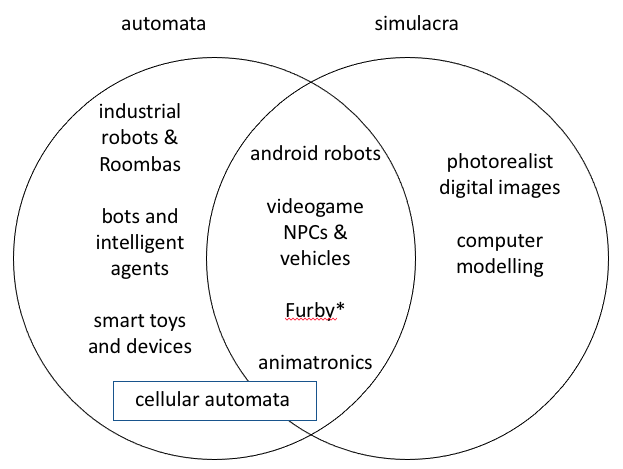 We should look to the digital game for the most compelling and generative toyetic source of concepts and material developments in artificial life and intelligence. The defeat of the grand master Garry Kasparov by IBM’s Deep Blue chess computer in 1997 is widely regarded as a key milestone in the development of AI. Unlike the eighteenth century Chess Player automaton (and despite Kasparov’s early suspicions), there were no tricks in Deep Blue’s operations, and it has been followed by other landmark defeats of the human mind, including the Google-owned DeepMind’s two neural network-based systems AlphaGo and AlphaStar, winning at Go against the master Lee Sedol and taking on online players of StarCraft respectively. In 2022 the French system NooK beat eight world champions at the card game bridge. Dating back at least to the Royal Game of Ur in the third millenium BCE, the board game has always been a quantitative, digital space of rule-bound, algorithmic behaviour. Think of the ratio between the complexity of thought required to play chess and the simplicity of the game itself in its topography and rules – a ratio exploited to great effect by the Chess Player.

From this perspective, it is no coincidence that so many instances of AI setting apparent new milestones have occurred in and as games. The fact that Alan Turing’s famous ‘Turing Test’ is a game is significant. This speculation on the possibility of machine-based thought, proposed in 1950, remains foundational to current ideas of Artificial General Intelligence (AGI). Though commonly known now as the Turing Test, Turing himself called it ’the imitation game’. The first round of the game entails an ‘operator’ asking questions via teleprinter of two people, a woman and a man, concealed in a nearby room. The operator wins the game if they successfully determine the sex of their interrogatees purely from their written answers – the game’s set up ensures no audio or visual clues are possible. In the second round the male participant is replaced with a digital computer programmed to “provide answers that would naturally be given by a man.” Now, the game is won by the machine if it successfully fools the operator into believing it is a man. As a thought experiment to illustrate a wider discussion of the possibilities of digital computing and various challenges to the question of whether machines could think, one might regard the game dimension of the imitation game as trivial – merely a rhetorical device to illustrate non-ludic concepts.

However, I would argue that it is just one instance of the persistent game-like thread through the genealogy of automata and artificial intelligence mentioned above. With its simplified and formalised space, clear and sparse rules of behaviour and narrow channels of operational communication, and its agonistic element, the game as a mechanical and aesthetic environment is the ideal habitat for the simulation of intelligence. DeepBlue and AlphaGo are generally presented as having replicated a much wider zone of human cognition and reasoning than the relatively narrow predictive and evaluative procedures actually needed to play board games.

I would suggest too, that there is often an echo of the Chess Player’s play with deceit and knowledge in more recent game-based AI breakthroughs. The imitation game itself is won or lost on the success of the dissimulation of its human or machine participants: observers are alert to the possibility of deceit, the computer is pretending to be a human, the test is passed, and the game won when the nonhuman’s trickery is successful.

[extract from draft of Toy Theory].