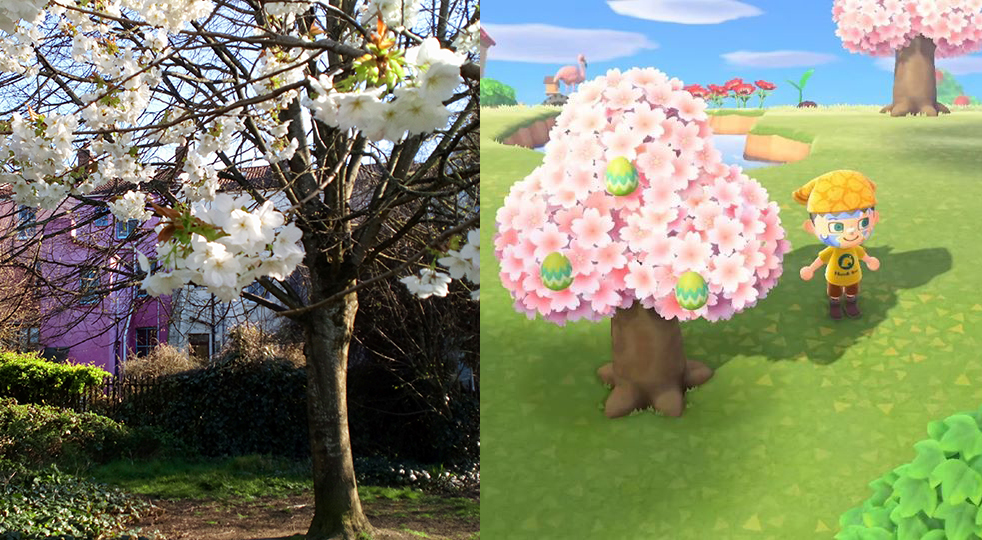 Note: the conversation that triggered this short piece has contributed to an article by Samuel Horti in the New Statesman.

The release of Animal Crossing: New Horizons on March 20th 2020 has proved a remarkable moment of serendipity for both Nintendo and old fans and new players of the Animal Crossing games. Characterised by unique temporal rhythms and demands, this gentle game offers an hour or two a day of relaxed exploration, conversation (with NPCs, but with the possibility to meet friends online), gathering and collection, and virtual making or crafting. As such it is ideal for nerves frazzled by viral threats and  the transformation of domestic everyday life. Already on social media players are sharing their experiences of the game, and a new, informal and dispersed meta-game is emerging: the playful drawing of comparisons between the activities and little dramas of Animal Crossing and actual life under conditions of lockdown, from ramped up online communication with work and family to foraging for resources, and moments of temporally and spatially constrained outdoor exercise (as permitted in the UK, at the time of writing). For instance yesterday my island Zoonisi (from the cod Greek: zoo-animal, nisi-island) woke up to an explosion of colour as most of the trees bloomed with cherry blossom. As I walked my (actual) dog later in the day, the actual cherry blossom in our park caught my attention with a virtual/actual vividness.

I’m fascinated by the Animal Crossing universe as a model or simulated economic system (see Animal Crossing Economics, and Accursed play for a wider reflection on videogames as economic entities). The global economic, political and social ramifications of the Covid-19 pandemic have prompted new thoughts along these lines, partly playful – in the spirit of the meta-game mentioned above- and partly serious. Put simply, I have argued that for all its trappings of consumer and financial capitalism, as allegorised in the figure of Tom Nook, Animal Crossing would be better understood as a system of symbolic exchange. The constant buying and selling, gathering and swapping of clothing, food, furniture, gathered and captured insects, fossils and shellfish, is driven not by any capitalist drive to accumulate scarce resources or exploit labour. Rather it is closer to the gift cultures identified by early anthropologists such as Marcel Mauss, in which exchange within and between tribes sustains and accentuates social communications and relationships. The animals in Animal Crossing offer inconsequential items and quirky epigrams, gifts given and received in mutually satisfying reciprocity. For the AC-lockdown meta-game I would play the new street-level gift relationships of symbolic and social exchange: shopping for elderly or self-isolating neighbours, the greeting of passing strangers (from at least a 2m distance), new hyper-local WhatsApp and Facebook groups for sharing the location of temporarily scarce resources such as toilet roll or bread, children painting rainbow posters to display in their windows, new mini-games on social media or chalked on park paths in distanced moments of children’s play.

We could raise the stakes of this game too. The journalist Samuel Horti, in conversation with me yesterday evening, offered his perceptive observations on the resonances between the zero interest non-finance of Tom Nook’s home loans and the ability to bash money from rocks and shake valuable fruit from the trees in Animal Crossing, along with the prevailing actual world economics of miniscule interest rates, frozen mortgages and job losses. What if, I wondered, the Conservative government’s massive – though grudging, tardy and partial – financial support for non-‘essential’ workers, the self-employed and suspended businesses could not be completely rolled back as the virus retreats? What if the capitalist myth of scarcity, and its particularly vicious neoliberal incarnation as austerity, were at last revealed as political not natural? The symbolic economics and natural plenitude of Animal Crossing, I would suggest, encourage us to look both backwards to Georges Bataille’s general economy of excess and forwards to current proposals both practical and utopian such as a Universal Basic Income or Fully Automated Luxury Communism. If money can be found, or produced, in abundance and resources mobilised on a national and global scale (and not in time of war), to serve the needs of society as a whole, then Animal Crossing  may one day be looked on as the game and meta-game that both helped us through the day-to-day anxieties of this crisis and provided a glimpse of a different future.