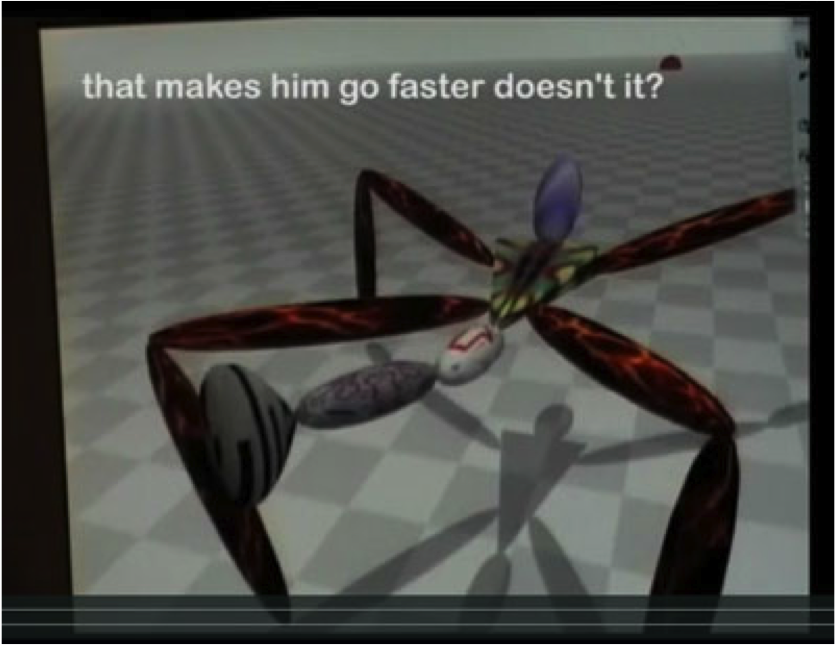 Current developments in mobile and locative media, and in augmented / mixed reality media (for instance at the Pervasive Media Studio in Bristol) take the permeability of virtual and actual space as a given. Digital space is thought of not as the worlds within worlds of virtual reality or cyberspace as imagined in 1990s, but rather as ‘content’ or experience delivered to – for instance – a smartphone user as they navigate their everyday environments. If the separation or transcendence of the actual lived world was the technological imaginary of virtual reality, then the dissolution of media technology into an augmented everyday is the promise, or dream, of pervasive media. However the interpenetration or layering of digital and actual space does not dissolve the specific media / technological forms of digital space. Rather we see a mixing or layering of heterogeneous domains, some the quotidian environments of streets, homes and playgrounds, some the intangible domains generated from databases, algorithms and user interfaces, some rendered in the Euclidean geometry of game engines, others in the text-constituted spaces of chat and Twitter. To understand these composite realities, I would argue, we need to pay attention both to the technological nature of digital spaces as software and hardware, and to particular events in which virtual and actual spaces are generated.

Below are some video case studies and thoughts about the interweaving of digital and actual space in pervasive game design processes and in children’s game culture. I am particularly interested in thinking through ways in which virtual and actual play spaces are constituted by movement and behaviour.

For the purposes of this discussion, let’s take two broad digital domains:

1. new pervasive media: the augmenting of reality through the tapping into, visualising or layering of data over the physical world or video streams, the locational positioning of bodies via GPS, mapping and accelerometers

2. The persistent scopic or ergodic regime of the three-dimensional computer generated space – from VR to videogames.

Taking The Pervasive Media Cookbook‘s glossary definition of SPACE as a starting point I considered the dreams or technological imaginary of digital media from VR to pervasive media of immediacy, of the dissolving of technologies and mediating conventions into everyday experiences, environments, and bodies:

The last years of the C20th were obsessed with the idea of virtual reality. Whilst head-mounted displays are still very rare we did succeed in building cyberspace, a virtual world of accessible data […] The early years of the C21st are all about the rematerialisation of the virtual, making data flows visible and embedding them into the fabric of our environments.

The dream of ubiquitous and pervasive computing is of spaces that are fluid, dynamic, multi-dimensional, responsive and smart. Our Euclidean sense of the everyday geometry of space is overlaid with multi-dimensional data possibilities from traffic and weather data to commercial and creative applications.

However the interpenetration or layering of digital and actual space does not dissolve the specific media / technological forms of digital space. Rather we see a mixing or layering of heterogeneous domains, some the quotidian environments of streets, homes and playgrounds, some the intangible domains generated from databases, algorithms and user interfaces, some rendered in the Euclidean geometry of game engines, others in the text-constituted spaces of chat and Twitter. To understand these composite realities we need to pay attention both to the technological nature of digital spaces as software and hardware, and to particular events in which virtual and actual spaces are generated. Each is necessarily constituted by the materiality of hardware and the immaterial and intangible, but no less real, operations of software, actualised by bodies and imaginations.

A digital space is real, but virtual, and as such it is quite different from actual space. It is reasonable to argue that it is entirely abstract and arbitrary, the invisible and intangible operations of code, of algorithms and databases. On the other hand this is the abstractions of code geared towards, structured as, an interface with human perception and movement. This is often – though by no means always – effected through the mathematical and graphic conventions of Euclidean space. A deep-seated western cultural reality effect: from renaissance to virtual reality, via the optics of the camera obscura, a mode of representation often assumed to most closely replicate actual human perception and phenomenal experience.

Thinking about space in these terms, I tried to draw out a distinction between the Euclidean basis of the look and aesthetics of popular virtual worlds (such as Bamzooki) and the spatial forms that are salient in their functioning as interactive and playful applications.

So, in the Bamzooki gameworld in the Sim You Later event (video below), the virtual camera, the player, the creature, objects in the digital environment are all ostensibly positioned by the logic of euclidean space. Yet these animals never really get anywhere. Like the cumbersome experiences of VR technologies such as the CAVE, or early racing car computer games, players may experience a sudden sense or realisation that it is not themselves– coupled with their avatar – that is moving through the space, but rather they are fixed and the virtual world slides past below them.

So, while the Bamzooki world is marked out in a tiled grid obeying the graphic laws of Renaissance perspective, the game operates through the spatial organisation of the virtual creatures’ body parts (organ-isation), their possible axes of motion and their working together to propel the creature towards its desire for a red marker or ritual combat.

Sim You Later from Seth Giddings on Vimeo.

So, the look of Euclidean space, but the grid serves mainly as a register or index of the speed of the creature, and the salient spatial forms are something quite different, something that resonates with both De Landa’s thinking on phase space and Deleuze’s Spinozism:

A body, of whatever kind, is defined by Spinoza in two simultaneous ways. In the first place, a body, however small it may be, is composed of an infinite number of particles; it is the relations of motion and rest, of speeds and slowness between particles that define a body […] Secondly a body affects other bodies, or is affected by other bodies; it this capacity for affecting and being affected that also defines a body in its individuality. These two propositions appear to be very simple; one is kinetic and the other dynamic. But if one truly installs oneself in the midst of these propositions, if one lives them, things are much more complicated and one finds that one is a Spinozist before having understood why (Deleuze 1988: 123).

A comparison with the Wildwalk fish installation is useful here. Like Bamzooki (and many putative 3D virtual environments) it presents a world in three dimensions but operates in only two. The virtual Y axis is illusory (though the fish installation projects a Y axis up into actual space – more below). Like Bamzooki it appears Euclidean but has no fixed coordinates, again coming into being through the interoperation of human and nonhuman behaviours. These participants moved towards one another, retreat (they sense each other’s presence but can never touch), dancing, circling – an centreless, eccentric, space. A circling and iterative intensification of behaviour and movement around kinetic moments. A few lo-res seconds of an interactive video installation at the Wildwalk science centre in Bristol (closed in 2007). The fish move and respond to players using ALife flocking routines (they are, in this sense, boids). It may not be clear from the video, but the digital water also responds to players, rippling as it it walked through.

The simple rotation of projector and screen through 90 degrees renders the actual gamespace (the space through which the human players of any screen game move) an augmentation of the virtual gamespace (and vice versa). The players in three-dimensional phenomenal and gravitational space simultaneously paddle in the virtual shallows, the latter’s two-dimensionality is simultaneously denied and reasserted through this clever device; a new take on the ‘depthlessness’ of the digital image.

Collision from Seth Giddings on Vimeo.

A collision between digital and actual spaces and bodies. The playtesters of this locative game are embarking on a journey through a narrative and cartographic time-space on the iPhone and Google Maps overlaid on the actual fabric and experiential time of contemporary Bristol. Attention held by an onscreen encounter with a C19th police constable, the player simultaneously collides with the ethologist, himself glued to his camera screen. As Actor-Network Theorists have pointed out, moments of collision, crashes, breakdown, reveal the usually hidden workings of machines and systems. In this instance, the collision highlights the intersections between digital and actual spatial systems.

These examples demonstrate that the dreams of Virtual or Pervasive immediacy are not easily realised. Digital spaces and their technological and material substrates do not slip frictionlessly into everyday experience. In each human participants must learn to use the devices, the symbolic and gestural systems, the game rules. The (nonhuman) devices must find their signal, respond to stimuli, deliver without lag. Players must bring – or quickly develop – technical aptitudes, a playful, patient and generous attitude towards the whole imperfect processes of playtesting. One ubiquitous experience of ubiquitous media is their breaking down, their lost – or never found – connections, bugs and lags. The paradox here is one of a commercial culture of upgrade perpetually promising ever greater immediacies and intimacies yet delivering them through perpetually changing systems and devices that drag our attention back to the materialities of hard and soft technologies.

Digital and actual spaces intersect and overlap in transient moments and in more persistent and pervasive formations. Developments in mobile and locative media, augmented and mixed reality, take the permeability of virtual and actual space as a given, But whilst designers may dream of, and shape, techniques and technologies for these hybrid experiences, but through everyday playful encounters of all kinds, unexpected and unanticipated monstrous realms occur. Realms in which the fixed points of the Euclidean universe are twisted by the gravitational pull of bodies and behaviours.

A version of these thoughts was presented at Connecting the Dots: movement, space and the digital image at Cambridge University’s CRASSH  – thanks to a kind invitation from Jenna Ng.