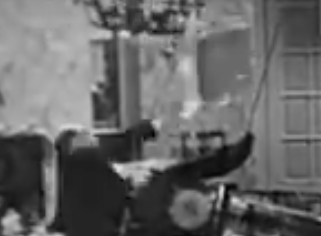 We’ve treated ourselves to a huge box set of Laurel and Hardy DVDs. One of our favourites is Me and My Pal (1933), which is set an hour or so before Olly’s marriage into a rich family. Stan’s wedding present, a jigsaw puzzle, attracts first the attention of the taxi driver hired to take them to the ceremony, then a policeman, a telegram messenger, Stan and Olly, and even the irate father-in-law to be. The draw of the puzzle of course results in the wedding being completely forgotten about.

My interest (here) in the film in relation to understanding gameworlds is the way it depicts the drawing into play of these men. Each performs their professional or narrative role but as they pass the table on which the puzzle is set out, each glances at it, then glances again, before tentatively picking up a piece or two and trying to fit them together. Quickly each is fully absorbed in the puzzle, oblivious to their surroundings and to the passage of time. There is no formal boundary or edge to this game, its influence is exerted not spatially but attentionally. The puzzle is a black hole from which no attention can escape. The film portrays beautifully the event horizon as glances and then hands and full attention teeter on the cusp before they are dragged, inexorably, in. This all-consuming attentional pull is only broken by the explosion of the game itself, as Olly’s living room is destroyed by a brawl.