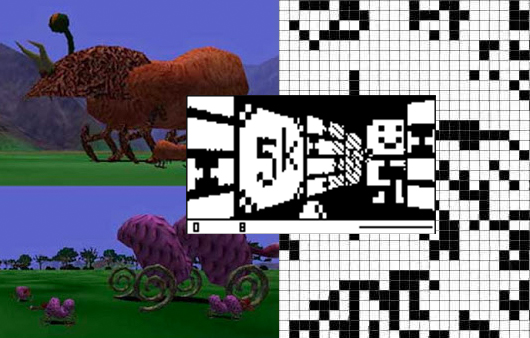 I compiled this sometime in the mid-2000s, as a curated list for Furtherfield. Riffing on gameworlds and lifeworlds, it resonates nicely with my current writing, but with a morbid twist… a study of the materiality and imaginary of artificial life in which most of the links and projects, and hence their animate entities, are now dead. The page itself is also deceased. I’ve changed the links where possible.

This selection links a number of software-generated worlds across art, computer science and popular culture. They are constructed from the computer-mediated cultural forms of simulation and emergent systems, forms that invite playful engagement from their viewer-players, ludic universes engendered and explored in both computer games and computer science.

John Paul Bichard’s ‘Staying in to play’ is a compelling and contemplative experience, an environment the kinaesthetics of which are familiar from the ten year history of the first person shooter videogame genre (FPS). Free from the frantic imperative to shoot or be shot, this project invites the player to reflect on their relationship with the simulated landscape and architecture, and with the codes and conventions of computer-generated space as gameworld. As with the best media art, this project is respectful of the pleasures and innovations of its host form.
http://www.variablemedia.org/ [dead link]

Atopian computer-generated gameworlds are not ‘virtual reality’ in the sense popularised in science fiction and some cybercultural discourses. They are not realms separate from our own reality, but set firmly within it. Simulations are real, material, the product of the limitations and possibilities of computer code. These worlds, their dynamics, laws, and physics, are productive of reality, with real effects on their players and their players’ world. Art and games bring inactual, but real, worlds into being. Lee Semmel’s Wolfenstein 5K demonstrates this elegantly. It is another FPS world, this time complete with the claustrophobic panic that Staying in to Play relieves us of. Though a fully realised architectural/game space of pursuit and conflict, its browser window is tiny (its code must take up only 5K of memory), so its material status as a program, as software, is foregrounded.
http://www.wolf5k.com/

The materialities of these ludic worlds are inseparable from their virtualities. My first experience of computers was at school, seeing a version of John Conway’s Game of Life running on the flimsy white plastic wedge of the Sinclair ZX80. The simple algorithms of this mathematical game – the simulation of cellular colonies (animated clusters of 0’s on a monochrome screen), through generations of life and death according to the relationships between any particular ‘cell’ and its neighbours – spawned entrancing patterns of emergent order and entropy. The hackers who coded Game of Life and explored its parameters could not separate their understanding of its simple mathematics from the sense that they were seeing something new – new systems, new autonomous relationships – emerging on the screen. The modelling of living systems, and the terminology of these cellular automata (evolution, populations, birth and death) seemed more than metaphorical.
http://www.bitstorm.org/gameoflife/

The Web is infested with these cellular automata, in art, science and game environments. These few examples are particularly entrancing:

[these sites are still operational and have lots of links, but the applets themselves seem to need archaic versions of Java]

Or visit Dr. Jane Prophet’s Technosphere, a web-accessible art project that playfully intervenes in art and science by allowing viewer-players to fashion artificial organisms and release them into a complex but intangible universe of interaction (both sexual and predatory) with other such A-lifeforms. Perhaps by necessity, perhaps by design, the gap between the 3D images of the creatures created for the viewer-player and the invisible encounters between these creatures and those of other players’ (communicated textually by logging on or by email) effectively highlights the gap between any simulation interface (whether it be the screen images of a game of The Sims or even Game of Life) and this gameworld’s materiality of algorithms and databases. The material and the imaginary feed off each other.
http://www.technosphere.org.uk/ [dead link but archive here: https://v2.nl/archive/works/technosphere]