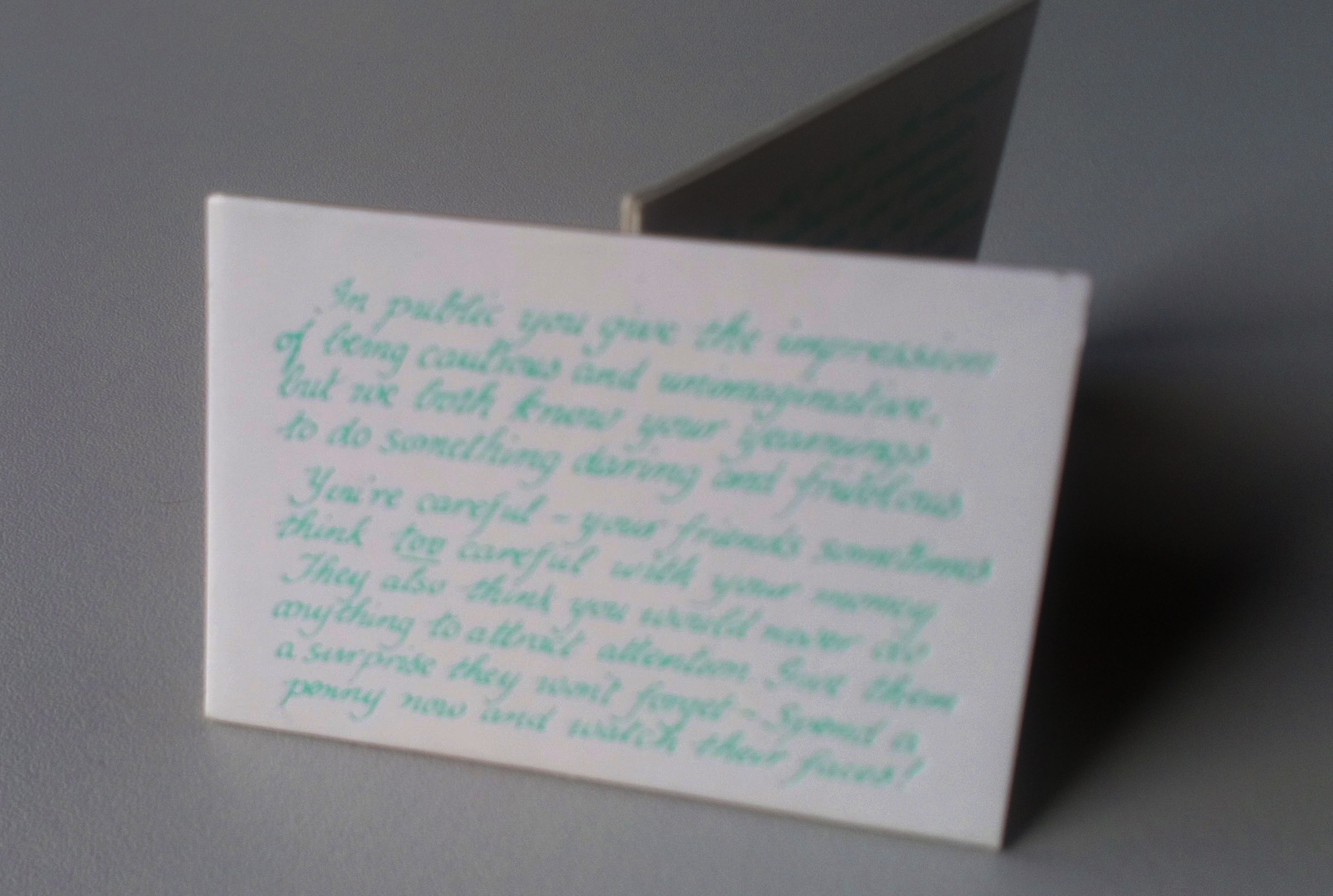 I know who I am, but who are we? Distributed subjectivity in the postindustrial machinic phylum.

The card is delivered to me from a fairground fortune-telling machine in the collection of the SeaCity Museum in Southampton. Its message is printed on thick card and has the look of handwriting. It assumes an intimacy between us, a relationship of mutual knowing – it knows something significant about me, and knows I know: ‘we both know’. But who is this interlocutor? The use of the first person plural is ambiguous: are we just myself and a singular correspondent, or is the message from a collective?

It recalls the platform announcements I used to hear at Newport train station around 2000, particularly after the Hatfield rail crash: “I am sorry to announce the cancellation of …” “I apologise for any inconvenience caused…”. These were automated, the stilted cadence of a message stitched together from pre-recorded words and phrases – clearly a machine not a human announcer. Yet the first person singular pronoun suggests an individual speaking to us with regret for their personal culpability. Had it been “We are sorry…” then this address would not have jarred. The collective pronoun signals a corporate identity – the train company as a body, a form of address – and hence a form of subjectivity, ontology even, not of a collective of humans but a corporate body of humans, systems, technologies and networks. We are familiar from advertising not least, as when a model or actor speaks for the company in the plural. The first person singular pronoun – the ‘I’ – then jars against the patient passenger’s knowledge that this is a system not an individual. The corporate ‘we’ in comparison is not ideological or illusory: in straightforward terms the announcement would be the designated voice of the collective workers and managers in the company. It is also, less obviously but more profoundly, the voice of a much less coherent body of human and nonhuman parts.

This then is an affective relationship with the machinic phylum. Again, it is not illusory or ideological – there is something of Dennett’s intentionality here, we need to (or are impelled to) treat the communicative event as analogous to interpersonal communication whilst we know it is different in important ways. I refer to the machinic phylum and not, say, the other Deleuze / Guattarian figure of multiplicity – assemblage – because the latter suggests a proximity and a congruity to a body, however heterogeneous its components they gravitate towards each other and are articulated with one another. The phenomena that manifest themselves in these moments of posthuman subject-objectivity are distributed across domains, much more an environment or world than any cyborgian entity. Guattari’s crackling proto-cyberspace of the missed telephone connection is the chance and contingent coming together of scattered devices, networks, environmental factors, individual and social behaviour and so on:

Guattari describes the criss-crossing of distant voices and machine-generated sounds that are audible when a telephone connection fails. This soundscape indicates a technological environment functioning more or less autonomously, an emergent phenomenon not intended by human design and that goes well beyond any notion of technologies as tools or extensions of individual humans or even social groups (Giddings 2011, The New Media & Technocultures Reader).

The fortune-telling machines then are a charming instance where subject-object relations are manifested from, through, and across a machinic environment: an interface of the simulated occult where the other side is a spirit realm of a pre-televisual and privatised entertainment culture (the fairground, the seaside), of a genealogy of automata that embody philosophies of consciousness (from Antiquity to the stunning creations of Jacquot-Droz and Vaucanson in the eighteenth century), to a contemporary heritage cultural economy. Who wrote these cards with whom and what in mind? Does the museum have a stockpile from when these machines had a commercial life, or is there a printer on the books with appropriate card stock and machines? If so, by what technical process (the text is indented into the card – some metal impression rather than gentle inkjet)? What economies of print and heritage must be sustained to allow this brief, liminoid and fleeting moment of connection ‘We both know…’?

The machine itself presents a playfully occult technics. The spirit medium here is a pen that springs into life once a coin is inserted. It bounces around in a comical approximation of writing, apparently animated magnetically by copper coils that surround it. The intangible spirit realm and the real magic of electromagnetism are overlaid, neither more miraculous than the other, and each as capable of a flat yet charming divination.

I also think about Woebot. This automated chat / bot met through Facebook Messenger. He or she is pictured as an identity icon with each message and as a head in a circle on my phone screen when prompting me to reply. From time to time a simple GIF presents a cartoon robot in a vaguely 1950s retrofuture style dancing in animated approval of one of my responses. Much of the conversation is characterised by the faux interactivity perfected by Nintendo in their handheld consoles games such as Animal Crossing: there is a to and fro of input, but most of my replies are pre-scripted, a word, phrase or emoji that merely affirms the chatbot’s last statement and breaks up what would otherwise be a long block of text advice. There are genuine choices as well though – the bot’s approach in any particular daily conversation is dependent on my initial response to a query as to how I am feeling. This response is effected through the choice of one a familiar series of emojis depicting emotional states: smily faces, frowning, laughing, crying, etc. A choice signalling general happiness will result in a more or less random topic, invitation to watch a video (selected from and linked to YouTube), or review past advice and resources. Whereas sadness, anxiety and distress emojis would trigger more targeted responses. An automated therapeutic urgency. Like the fortune-telling card Woebot talks to me – or interpellates me – as a friend, through a synthetic but effective intimacy. This includes a simple but extremely effective emotional / didactic economy of stickers and rewards is in play: he praises my correct answers or my written responses to open-ended questions (the system only recognises and processes a few multiple choice answers so the written response works on a kind of AI trust – it rewards me writing, not what I have written) and rewards me with funny or celebratory GIFs. These repeat on a short cycle so the sense that this is automated is neither hidden nor – interestingly – a hindrance to my emotional engagement. In fact, like the other examples above, there is a kind of reassurance in communicating with the machinic here. There is a pattern and system to follow, and whatever the reach and span of the machinic-environmental hinterland, no immediately present human individual to be felt as bored, obliged, impatient or judgemental. But, like the card printer and train operator’s audio system, the assemblage behind is palpable – invisible, intangible but lying behind, with professional (and in this case therapeutic) expertise, knowledge, techniques. A little research reassures that the people behind Woebot know what they are doing and are doing so for good reasons. And the videos Woebot has curated open these circuits up even further: to therapists and university researchers, animators and editors, to the technics, socialities and economics of YouTube.

Again then, the phylum: this is not a dialogue between a singular me and a group of experts mediated by a light-hearted and playful interface, it is a … what, how to describe it, without running through the Deleuzian clichés? Contingent and environmental. Affectual. The Woebot image is not an illusion, nor even a metaphor, but rather a synecdoche: a part of the environment that it stands for and mediates with.